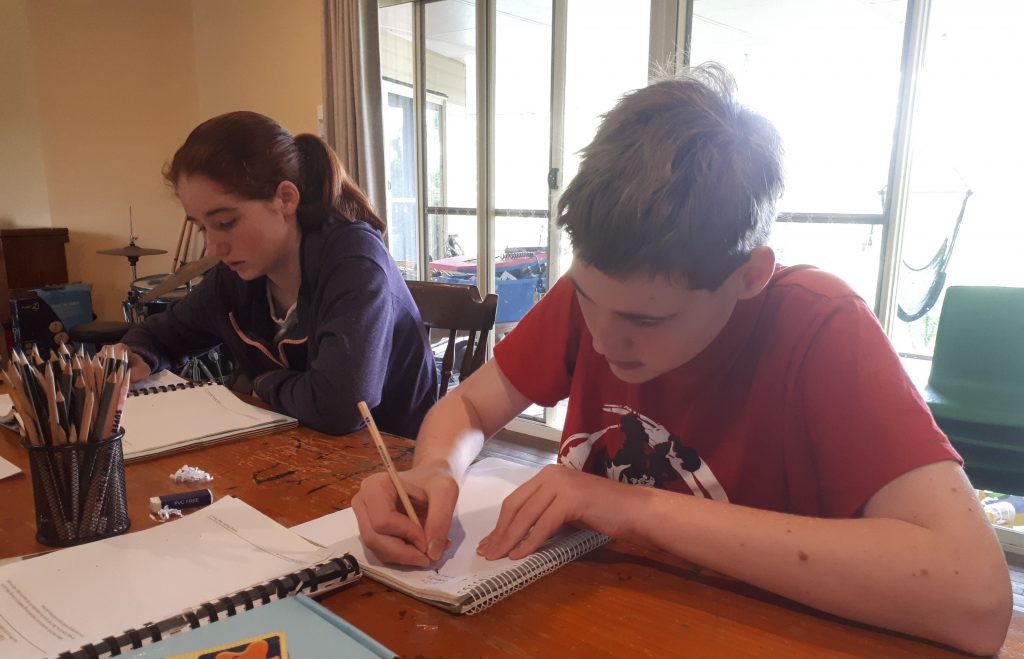 Genevieve’s studies for 2021 will include:

To meet the requirements for Stage 6 the following subjects to be undertaken are:

Genevieve has great language arts skills; both oral & written and she reads voraciously.

Genevieve will continue to develop her knowledge, understanding and skills of communication through the written and spoken word, to develop her listening and reading skills, to reflect and think at a higher level, to value the power of language not only in expressing herself but in exploring the role of language with others and the impact of language socially, culturally and morally.

Genevieve’s English studies will include

Genevieve will continue with weekly dictation lessons, which continues to strengthen her spelling, punctuation, listening and recall skills. Her passages from Spelling Wisdom are selected from passages of well known classics such as Dickens and Bronte.

To have the ability to think and communicate both orally and in written form is an underpinning of our educational goals; the study of logic is an excellent basis for higher level thinking.

We have covered; what is a fallacy, what is good reasoning, benefits of listening, opposing viewpoints, red herring fallacies and recognising them, ad hominem attacks.

Shakespeare
Genevieve has enjoyed a few of Shakespeare’s plays. She is to select and read one play of her choice, likely a comedy.
Resource: Complete Set of Shakespeare

Genevieve is always to be found with a book in hand, reading classics as well as more contemporary literature.

We are then to discuss and analysis works read.

Nurturing a love of literature within our family is at the core of our family’s learning approach, we immerse our children in quality literature from birth.  We read from many genres and delight in living books – a book that makes the subject matter ‘come alive’.

Genevieve still enjoys listening to our daily Read Alouds, it’s a really special time that we treasure, it’s a time of precious conversations.
Resources include: Our extensive home library and the town library.

Poetry
The listening to and memorisation of poetry is part of our family’s culture of nurturing a love of literature.

Genevieve will select two poets to study in depth, one Australian & her choice of either an English or American poet.

Genevieve will continue to be immersed in poetry daily and memorise at least one poem a term, to recite  at our family weekly recitation nights.
Resources include: Banjo Patterson’s poetry, John O’Brien, John Donne and more from our extensive poetry collection.

Genevieve is a bright student and quite capable of achieving the maths syllabus. Whilst mathematics isn’t her favourite subject she understands the importance it plays.

During 2021 Genevieve’s studies will include; algebra, measurement, statistical analysis and financial mathematics.

Genevieve has a deep interest in Religious Studies. Genevieve will complete two Religious Tradition Studies; Christianity and Judaism, she will also briefly touch upon Islam one of the other major religious traditions.

Genevieve’s Christian studies will include:

Judaism studies will include:

By studies end we wish Genevieve to have an understanding and critical awareness of the nature and significance of religion and the influence of belief systems and religious traditions on individuals and within society.

Resources: Engaging with Islam and WADI, Understanding the Scriptures,

Our Moral Life in Christ, The Bible, Catechism of the Catholic Church, Beginning Apologetics

Genevieve has an appreciation for history and desires to further her knowledge. By studies end Genevieve will appreciate how people, forces and ideas have shaped the modern world and gain a deeper understanding of the developments of the modern world in their historical context. To analysis and acquire an understanding of differing views of differing source materials.

During 2021 Genevieve will study;

Genevieve enjoys drama, both performing and attending. She will be participating in plays throughout the year with our local playhouse, Criterion Theatre.  She will be writing scripts, and attending plays.  She will continue utilising these learning opportunities in order to meet the following objectives of the NSW Syllabus.

Genevieve will develop:
Knowledge and Understanding about, and Skills in, making

Genevieve enjoys making and preparing food and has undertaken a variety of food technology skills. She will be furthering her skills in preparing baked goods and a variety of other dishes for
a range of purposes. Genevieve will be researching, selecting ingredients and using equipment for a range of purposes. She will be converting recipes to accommodate a variety of dietary requirements, and present food attractively. Her understanding of food preparation requirements and techniques, including health and safety enables her to design, manage and implement solutions in a safe and hygienic manner for specific purposes.

Genevieve will be encouraged to express ideas and opinions, experiment and tests ideas and demonstrate responsibility in decision-making in a safe learning environment.
Genevieve  will be encouraged to reflect on and evaluate decisions made in relation to solutions for specific purposes with regard to food at a personal level and to also considers the social implications of these in a variety of settings.

Genevieve will work to ensure she meets the following Objectives and Outcomes of the NSW Syllabus.