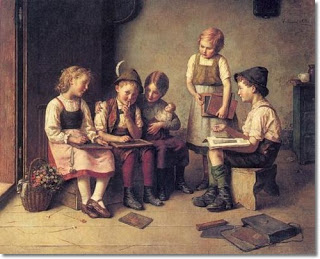 An extremely productive week:)  Also David created a new recording sheet which helped to ‘catch more of the picture’.

Reading Practice
Very diligent, lots of progress
Saxon- Read the entire book of ‘The Spooky Old Tree’ over the course of the week.  He was so proud of himself:)
Genevieve- 1 chapter of ‘Mummies in the Morning, Magic Tree House’, He Bear, She Bear, Would You Rather Be a Bullfrog?’

Picture Books
Continued with our A Book & Activity🙂  This week our theme was Mem Fox’s books, a big hit!

We read:
Magic Hat
Shoes from Grandpa
Good Night, Sleep Tight
Where is the Green Sheep?
Arabella the Smallest Girl in the World
Harriet You’ll Drive me Wild
Time for Bed
Boo to a Goose
Hattie and the Fox

Faith
Genevieve & Mariah – I read 5 chapters of St Pius x (vision bk) to them.  This is such a family favourite!:)  The older children stopped by for a few sections to reminisce:)
Mariah – Sts Especially for Boys – Joan Wyndham
Xavier – read three chapters in Our Goal and Our Guides on Hierarchy & roles, Apostolic line, Jesus’ parables, meanings and teachings.
Dominic- Read and answered questions for 1 chapter ‘Understanding the Scriptures’. St Paul spreading the faith, the Gentile/Jew issue

Maths
Saxon continuing to breeze through maths, 12 pages this week of subtraction and addition.
Genevieve working on addition with tens columns, she is beginning to find it easier
Mariah working on decimals and dividing.  Enjoyed some revision exercises in an Excel book
Malachi – 5 lessons with Maths.com.  working on numerals and medium
Xavier – worked on problems with Maths.com.au. Limits with Kahn Academy.
Dominic – 3 tuts & Qs on algebra at Kahn Academy.

Copywork
Genevieve – 6 lines.  Discovered she has neat writing in creative writing book but not as neat in handwriting book.
Mariah – transcribed a passage from Qld reader.
Malachi – 5 pages. Really need to hold a ‘boot camp’ and cross this off the list for him.

Dictation
Mariah -one less impressive spelling.
Malachi – 1 lesson, still struggling, hand writing is appalling.
Xavier – 2 lessons with only 2 mistakes each. His spelling has improved dramatically.
Dominic- 1 lesson only small mistakes.   His spelling has had massive improvements! in dictation.  She started a new spelling program, sequential spelling and enjoyed several lessons, off to a promising start.

Spelling
Mariah – Sequential spelling 3 lessons
Malachi & Xavier – 3 lessons of All About Spelling, Malachi is struggling to keep up, lots of mistakes.  I’m going to have to have separate lessons for the boys.

Writing
Writing Club for three boys, discussed ‘To Kill a Mockingbird’ with Xavier, about the characters, racism and the authors biography.
Dominic worked extremely hard on his novel and his nearly finished!!!!
Introduced story writing to Genevieve and Saxon decided to also have a go.  He copied a sentence from a VL Burton book.  My plan with Genevieve is she is to begin writing her own stories not always having me transcribe.  At first we had lots of tears quiet ones, not a dramatic scene, she truly found it hard but she persevered and pushed through I am so proud of her!!I required her to write a sentence a day but some days she wrote more than one!!  Rather particular about spelling and uses previous words to respell the same word later in the story.

Geography
Mapwork with Saxon thru to Xavier.
First we located and coloured Australia on a world map.
On the Australian map we drew the state borders and labelled them.
Older children (Mariah+) added the capital cities.
Xavier added lots of landmarks.

Creative Arts
All children continued to put lots of energy into sketching!  Very impressed and astounded with their ability!!
Music- M & D continued to practice and progress:)