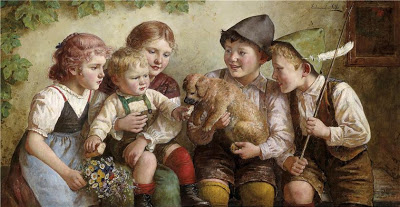 Our intentions were to start back the term ‘raring to go’, in fact we planned to start back the beginning of the NSW school holidays as we’d finished Term 3 early.  However life, exhaustion etc meant ‘Week 1’ was very light on indeed.  So onto recording week 2 & 3, which were an improvement. though there were interruptions as the older two boys were being builder’s labourers, renovating a house in town.. painting  sheeting walls etc

Reading Practice
Genevieve and Saxon began back with a little practice, both are reading well in fact Genevieve is very close to being independent, just needing to ‘put in the hard work.’

Picture Books
Rather excited here, I have begun to recover my lost enthusiasm🙂 with A Book & Activity.  Lots of fun, our themes have been Virginia Lee Burton’s books and Koala books.  We read a pile of books and enjoy a hands on activity:)

We read,
Koala Lou by Mem Fox,
Kolo the bush Koala(OOP)
Two-Thumbs the Koala by Leslie Rees.(OOP)
Maybelle the Cable Car
Mike Mulligan and His Steam Shovel,
Katy and the Big Snow
The Little House.

Faith
Xavier read a chapter in Our Goal and Our Guides on Heaven Hell & Purgatory.
Mariah read a couple of books (see below)

Maths
Saxon is breezing through maths, focus is subtraction at present.
Genevieve is nearly completed her grade 2 book.  i noticed work she was struggling with ie subtraction she is now finding easy:)
Mariah is working diligently as is Malachi.
Xaiver is taking a short break from Maths.com.au and has been watching Calculus tuts on Kahn Academy.  Dominic also has been using Kahn Academy for maths.

Copywork
Genevieve and Mariah managed a little copywork, lacking enthusiasm however.  Not sure what to do with all of them in this area.

Dictation & Spelling
Mariah achieved one lesson in dictation.  She started a new spelling program, sequential spelling and enjoyed several lessons, off to a promising start.

Writing
Dominic wrote a couple of pages in his novel and wrote first draft of an impressive persuasive essay.  “Should teens be allowed to play violent computer games?”  Very happy with his first attempt and look forward to seeing his second edit!

Typing
Malachi and Xavier have achieved a little.

Science
Younger three have been listening to chapter book, The Magic School Bus Volcanoes.  We concluded our brief unit by making bi-carb volcanoes, always a great hit!
Mariah also undertook a couple of experiments by herself and recorded her observations.
Malachi has been reading several chapters with the God’s Design series on Space, orbitation etc
Xavier’s science focus has been on physics, magnetism, energy, electrons and fluids, using Kahn Academy as his resource.

Computer Technology
Malachi and Xavier are really enjoying the Kahn Academy computer science program.  They have happily spent hours learning how to write computer language.  They have created swinging pendulums, orbiting figures, gravity and ice-creams, spinning dots, continuous circles and changing colours.  They have amazed me with their understanding.

History
Malachi read a chapter on the Russian Revolution

Creative Arts
Mariah, Genevieve, Saxon and Ignatius enjoyed a watercolour lesson painting a Iguana. They all did a very impressive job, and too our Book and Activity involves lots of creation:)
Dominic has been putting lots of energy into sketching, creating wonderful masterpieces, this in turn has inspired all of the children to drawing and they are showing some impressive talent, Saxon has surprised us:)
Dominic has also devoted hours of practising his clarinet and has made noticeable improvement, his teacher has shown him new keys.  Mariah is plodding away with the piano.