A productive learning month, capturing a few of the highlights.

Carpenter’s essay……Carpenter entered an essay competition,  ‘The Greek term ‘polymath’ referred to a person who had expertise in a number of different subject areas. Is there a more contemporary figure that you believe deserves this term? What specific contributions has this figure made to his or her fields of research?’
This essay was the impetus for a huge growth area for him.  Research, diligence, bibliographies are just some of the skills learnt.  His essay writing skills grew enormously during this period.  I have lots more to share about this, which I will in a later post, suffice it for now to say, we were incredibly impressed!

Steady progress in the 4Rs, Science and the Humanities

Many of our favourite and memorable moments in our home education journey is when our children take up an area of interest and learn of their own volition.

A big focus in creative play has been creating with clay.  Princess was keen to try a new medium and then all become interested.  Houses, chickens, medallions and more have been proudly displayed. 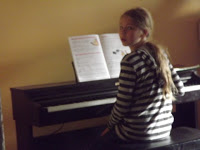 Music has also seen a resurgence of interest.  Princess is loving piano lessons and Carpenter is learning the clarinet, both are very diligent in practising.

The moment that Jelly Bean realised she could read, I’d been assuring her this was the case, but she didn’t really believe me.  Her excitement was so magical, in the midst of reading a Magic Tree House chapter books she just ‘clicked’ and became so enthused, wanting to read more and then she rang Dad to share her excitement:):)
Documentaries Watched

The consuming reading  of books, in particular living books comprises the bulk of our learning.  Attempting to record most of the books read, although I may have missed some.