Inspired by my enjoyment of Angela’s Choice Time and Learning in Review posts, I’m joining in Kylie‘s Monthly Memories, a great way to commit our memories to ‘paper’ each month.

Endeavouring to capture the learning highlights of the past three weeks. 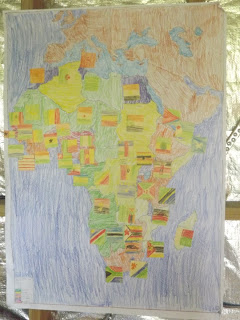 Our greatest achievement was our Mega Mapping.  The evident enthusiasm with which this project was received was heartening.  Truly, to see our children focus for six hours straight, mapping and creating flags for every African nation was impressive!  Best of all they now know and can locate each African nation.

We endeavoured to make consistent, steady progress in Maths, Science, Language Arts and the Humanities, and for the most part have, however the past month consisted of a few interruptions.

Many of my most favourite moments in our home education journey is when our children take up an area of interest and learn of their own volition.

Hours of play were focused on the creation of K’nex masterpieces [alas the photos were deleted:( ].  These masterpieces were incredible crossbow weapons, outfitted with the capability of projecting missiles for a great distance.  Calculations and corrections and alterations raged for days. 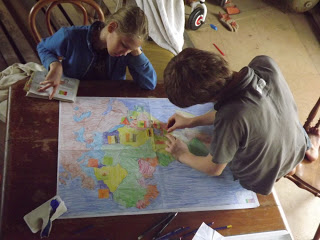 What can I say, it really was a special moment.

Zoo Tales Season 1 & 2
A documentary based on zoo keepers endeavouring to save and care for their animals, pelicans featured largely.  The children found the series interesting.

Poetry – We enjoyed reading various poems from the Oxford Treasury of Children’s Poems.  I love it when we find old favourites and the older children chime in reciting the poems from memory.  Another delight is when a child appropriates a poem for pertinent moments, such as Mr Nobody, often a relevant poem;)