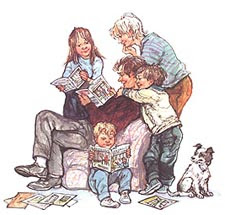 Chiara – Chiara is an independent learner and a speed reader with an eclectic taste who consumes a prodigious amount.  Chiara is our first Graduate.  In Term 2 Chiara completed her formal education with us, and in Term 3 she began Certificate 3 Administration/Bookkeeping at our local Tafe, finishing in Term 4 with 100% in her Bookeeping exam.  Term 4 she completed the STAT test )scroe 171, ATAR 84) and was accepted to attend a Liberal Arts College to study her Liberal Art Degree.
A privilege  and an honour to have travelled this learning journey with Chiara.

Dominic– A fantastic year for Dominic.  He consistently applied himself and grew in confidence.
Dominic continued to enjoying Writing lessons with Sr Judith strengthening his essay writing skills.
With the addition of the One Year Adventure Novel to his program Dominic reapplied himself to writing his novel with a clearer direction.  He has typed over 36,000 words and has handwritten even more chapters.
Dominic consistently applied himself  to studying Grammar/Composition and enjoyed it, making great progress.
Dominic’s made huge improvements with his spelling ability, a combination of studied dictation and All About Spelling.
Dominic had a good understanding of concepts in his literature analysis, easily able to participate in conversations.
Dominic loves the fantasy genre, although he did manage to read several non-fantasy novels.
Dominic struggles with maths, to understand and retain the various processes, however he strives hard and this year had a breakthrough with the “Life of Fred’ books.  The approach in these books suits his learning style. necessary.
Dominic continued to learn some basic Spanish.
The overview approach to history continues to be a good fit for Dominic and he covered, Modern History and the Middle Ages this year.
Dominic was the driving force for our teens Science project this term, the study of computers.  They pulled several computers apart and rebuilt them, learning so much.  They also upgraded a couple of computers.  Dominic was really rather impressive and incredible in his confidence, ability and the direction he gave.  Strengths in conceptual thinking.  He also studied physics and basic medicine.
Dominic thinks deeply about his Faith and has lots of questions and thoughts.  He completed Introduction to Catholicism and began Understanding the Scriptures.

Xavier – Xavier is a quick learner and a deep thinker.  He is an eclectic reader who learns effortlessly in most areas.
Xavier’s strength this year was reading, he reads from a wide genre and extensively.  He directs his own reading list and often includes classics.
Xavier continued writing lessons with Sister Judith and structures his essay well, albeit briefly. He does not always find it easy to express himself in the written form, although he has no trouble orally communicating his thoughts and ideas.
Spelling began to improve under the direction of the All About Spelling program, Xavier is making connections as to rules.  His dictation is also showing signs of improvement.
Maths is a favourite subject of Xavier’s and works consistently and progressively well.
Xavier has a keen interest in Science and extensive knowledge particularly regards Natural sciences.  This year he also enjoyed a major project  re-building computers with C & D as a valuable member of the team.
Xavier learns basic Spanish via Live Mocha.
Xavier continues to enjoy the overview approach to history and will spontaneously narrate what he learns.   He often was amazed with how pertinent Current News was with his Modern History unit.

Malachi – Malachi continues to fly through his work, having no trouble comprehending and completing the majority of his work with ease.  When we ‘step up’ his work he rises’ to the occasion every time.
Malachi’s story writing is excellent, his imagination and vocabulary are both rich, and his Writing Club essays are fantastic.  Next year he will attend Writing Lessons with Sr Judith.
Malachi’s greatest need is to improve his spelling ability, however since we have undertaken studied dictation and All About Spelling he has begun to make progress, within the last month he has made great strides, albeit he is slow as he is taking care to spell correctly.
Malachi has nice handwriting although he was not so keen this year.
Malachi spent much time reading this year and has extended his standard.  He still enjoys our read aloud time.
Malachi began the year enjoying online Maths, (Maths Buddy) but like his younger siblings began to lose ground.  He is rapidly making up ground since we returned to Singapore Maths.

Malachi is interested in many areas and continually soaks up information.  His bank of knowledge is impressive in an array of areas.
History, Geography, Science and Faith are all areas that interest Malachi and he often relays what he has learnt to conversations along with ‘extra’ knowledge he has gathered.

Mariah – A diligent and conscientious student, learnt and completed her work with ease.
Mariah astounds me with her spelling ability, she understands the rules easily and is incredibly fast and accurate, 🙂  She is also strong in her dictation.
Mariah’s handwriting is a pleasure, she is keen and it is reflected in her work.
Mariah’s loves our weekly Writing Club and was eager to write.  She enjoyed creative stories as well as our more formal lessons.  She impressed me with her ability to take notes and write with good structure.
Mariah enjoyed the editing approach to Grammar and mostly found the mistakes.
Mariah exploded in reading this year, she became a voracious reader and is often to be found devouring various series.  She also loves our read aloud time.
Mariah overcame her hurdle with maths during the year and began to progress.  A regretted decision was to use an online Maths program, ground was lost, towards the end of the year we happily returned to Singapore we busily began to make up for lost time.
Mariah enjoys a living book approach to her subjects; Science, history, Geography and Faith. Experiments, you-tubes, documentaries, quizzes, projects, lapbooks and notebooks hold Mariah’s interest.

Genevieve – Genevieve made wonderful progress this year and was keen to learn.
Genevieve put in a huge effort in her reading and greatly progressed.  She knows all her sounds, can read easy words and sentences, is helped greatly when reading the story in context and just needs consistent practice.
Genevieve enjoyed listening to chapter book read alouds and easily understood and followed the storyline and characters.  She had a good concentration.
Genevieve has begun the All About Spelling program and is keen to learn, has an excellent grasp of segmentation and the various spelling rules, she is showing great potential to be a good speller.
Genevieve has become very keen on handwriting, although she doesn’t always having a good pencil grip.
Genevieve is slightly advanced in her maths program, adding and subtracting with three digit figures.  She generally completes her work with ease, rarely getting a problem incorrect, although at times I suspect she does not always understand.  However I’m confident one day she will ‘click.’
Genevieve enjoyed science experiments, and watching science you-tubes and documentaries.
Genevieve became keen on history towards the second half of the year, enjoying our study of Ancient Egypt.
Genevieve enjoyed learning the Continent songs with Mariah.
Genevieve was most diligent in her FHC prep, and was excited to make her FHC in September.

Saxon – Saxon has had an ‘explosion’ of learning this year and is far more interested in lesson time than any of our other boys at this age.  He is a very bright boy.
Saxon has shown a keen interest in learning his sounds and now knows the majority of them, he will soon be ready to begin reading!
Saxon will confidently write his own name, and many other family members.  He often asks how to spell words and happily copies sentences, filling pages with words.
Saxon has begun the All About Spelling program and is keen to learn, has an excellent grasp of segmentation and the various spelling rules, he is showing great potential to be a good speller.
Saxon has an exceptional grasp of number concepts.  He can recite numbers into the hundreds, and read and write many numbers on the hundreds chart. He adds and subtracts numbers below 20 with ease.  He can read clock time, o’clock and the half pasts.  He understands placements; first, second, third etc
Saxon loves story time and easily follows the storyline and characters.
Saxon has an interest in the continents of the world, can find Australia and some others and name some countries too.
A dream to teach.

Ignatius – A bright boy who is always keen to join in with Saxon.  Ignatius loves story time and insists on having ‘books’ and joining in at lesson time.